South Knox County and the MPC 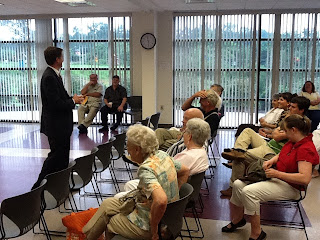 At  Mayor Burchett’s Constituent Night / Town Hall meeting last night the issue of the appointment of an MPC Commissioner came up. Obviously, Rachel Craig a two year MPC Commission appointee was not reappointed. So, there is currently no one from South Knox County on the appointed MPC Commission.

Todd Shelton was the first to bring up the issue. He asked about the appointment. Mayor Burchett responded that Jeff Roth was raised in South Knox County. Roth’s uncle owned Graveley’s Tractor on John Sevier years ago. He explained that Roth runs his father’s business and is a successful businessman. Burchett explained that he doesn’t look at issues as North, South, East or West. But as Knox County as a whole. Burchett further stated that when I am looking to appoint someone I do not look at their race, religious background or where they live. Mr. Shelton asked for a show of hands of those concerned about the MPC appointment about a 1/3rd  of the 50 individuals indicated they were. (I counted 12 hands raised, there were probably another 5 or so that didn’t raise their hands) 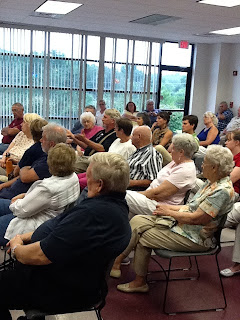 A lady talked about how she had always participated in the 9 counties 1 vision process and other community led initiatives. She liked that process. Another lady stated that it seems like you were thinking with a pro business agenda and when could an appointment happen in the future. Knox County Mayor Chief of Staff Dean Rice said there is another appointment coming up on MPC by the City Mayor. Lowell Cook stated “we feel it’s already not fair, here we are the red headed step child”. Then a gentleman identifying himself as Bill Cox, the poor one, not the one that owns the furniture store, suggested that “you need to think of someone with capabilities, The one we had had capabilities.”
The last question was asked by me. I asked the Mayor in front of the group. South Knox County has two County Commissioners that live in this community. Commissioner Mike Brown and Commissioner Mike Hammond. Did either of them voice any preference for a South Knox appointee? He said No. A lady in the crowd yelled out, did you ask them? To which another lady said “he shouldn’t have had to.” Mayor Burchett went on to say that even the appointee did not contact him with a request for appointment. He said there are no lifetime appointments. No one is assured of appointment.
After the Mayor’s Constituent Night, I traveled over the the South Knox Optimist Club at Gary Underwood Park for the South Knox Republican Club Hot Dog picnic. Commissioner Mike Brown was there. He and I talked about the Mayor’s Constituent Night, I told him of my question and the Mayor’s answer. Brown said “they didn’t ask” I told him that Mayor Burchett said that Rachel Craig did not ask him for the appointment. Brown said “Bull—–Hockey” He went on to say that he (Brown) introduced her to Dean Rice and stated she wants to be appointed.

I intend to ask the MPC today for her attendance record in the two years while she served on the MPC. More details as they develop.

As a disclosure, I would like to share that on the Screams From the Porch blog here yesterday that Rachel Craig implored the blogs writer that he should not associate with me, (because the icky will wear off). Well, I posted a response that the difference in Mike Donila (the blog author, who happens to be a good and reasoned journalist) and Rachel Craig is that Donila and I have met, we have had several conversations and we have an acquaintance. Rachel Craig and I on the other hand have never met. She has an online presence that is negative, condescending and self righteous. I had hoped to meet Rachel Craig last night in the hopes that in reality she isn’t really any of those things. Last night she was AWOL (Absent With Out Leave) in defending her community and her record as a 2 year MPC appointee.

As for Jeff Roth, Knox County’s New MPC Commissioner, Mike Donila over at Screams From The Porch posted a blog post yesterday, detailing a phone conversation / interview with Mr. Roth. Read it