What is Going On with Knox County Schools and After School Functions?

School buildings are supposed to be community centers, built with the community tax dollars, used by community citizens that are teachers and the students of taxpayers. For months, Mr. John Peach had approval for an after hour hours town hall meeting.

Mr. John Peach, local director of Act! for America, has been working for months to bring Dr. Bill Warner and Matt Bonner to the Farragut high school for a Town Hall Meeting on April 24th. Dr. Warner’s scheduled topic was Sharia law and the threat it poses to the American culture. As the S.E. Director for the Crescent Project, Mr. Bonner was going to tell of the growing Christian faith in Muslim nations.

The flyer directing people to the town hall meeting by ACT! for America discussing Islam caught the attention of some people in the Knoxville Muslim community.

On April 7, 2014 a book that was on the counter of a local elementary school caused a bit of controversy. 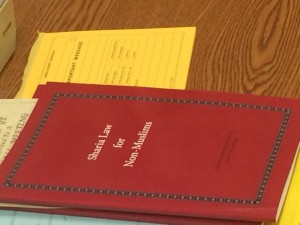 On Thursday April 10, 2014 on the 11 p.m. news WATE-TV profiled the upcoming event and included a video clip and statements by Abdel Rahman Murphy, UT Muslim Chaplain who said this type of event should not be allowed at a public school because it was not “comfortable” for the rest of us to know about.

The next day, April 11, 2014 Dr. McIntyre informed John Peach that permission to hold the Town Hall at the Farragut H.S. was rescinded.

On April 13, 2014 the venue changed and the event will still occur. the public is invited.

Because Mr. Peach is expecting a larger crowd due to the publicity, he’s chosen a venue with plenty of seating. There will be a seat for you!

Please come and show your support. Bring your friends, family, and neighbors to hear Dr. Warner explain what Sharia Law is, how it affects YOUR life, and how Tennessee is dealing with it. Also hear Matt Bonner’s personal experience from his work with The Crescent Project, the national Christian ministry reaching Muslims for Christ.

In addition, Dr. Warner posted this video online about the controversy.

Early to bed, early to rise, work like hell, and advertise. – Ted Turner