Yesterday, Former State Representative Harry Tindell was the speaker at the Boyd Cloud Saturday Morning Democrat Club. With the weather and the beginning of the Christmas Season, the crowd was small. President Gayle Alley, Activist Susan Jennings, Attorney Bill Hotz, Mr. Bob Scott, Tindell and myself. 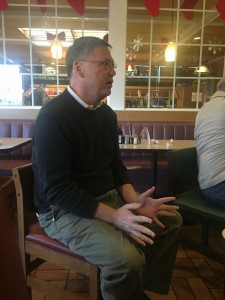 Tindell mentioned that in his years particularly working on the Budget Sub Committee the goal was to fix things. Now, the legislature moves so fast. When the Democrats were in charge they would meet until Memorial Day. Now the legislature is out by mid April.

Tindell said that he doesn’t fear for the state, he said the Republican majority is competent even if you disagree on the key hot button issues. The state is not going to end up broken.

Tindell said that TN will be RED = Republican for sometime. He said that for the Democrats to be competitive at the Governor level the party needs either a wealthy or a celebrity as a candidate. Country Singer Tim McGraw was mentioned from the group as a celebrity candidate. Also, Former Nashville Mayor Karl Dean was mentioned as potentially being in the wealthy column and also maybe Chattanooga Mayor Andy Berke. It was believed that Dean and Berke could compete statewide.

The discussion about ObamaCare, right now in Washington, D.C. nothing is happening with Republican firm control over the U.S. House and a small control over the U.S. Senate and the the Democrats with the President. The Republicans want to abolish ObamaCare and the Democrats want to do something just NOT abolish it. Tindell believes that if one party gets control of all levels at the Federal level that then health care will be revisited.

Tindell said that he has always believed that in his life a third party would emerge and that Donald Trump may speed that up. The thought has been that Trump if unsuccessful as the Republican nominee would go third party. However, if Trump were to become the nominee there was some group discussion about if the moderate main stream Republicans might not launch a third party.

Some discussion about Hillary running mates were discussed, it seems the two Castro brothers; Congressman Joaquin Castro or his twin Julian Castro from Texas might be likely ones at this point.