On May 15, 2015 Former failed United States Senate Candidate John D King filed an appointment of Political Treasurer form with the Knox Co. Election Commission, he appointed Leon Spencer of Maynardville, TN as his Treasurer. On July 14, 2015, they filed a Campaign Finance Disclosure for Knox Co. Commission Sixth District Republican Primary 3/1/2016. King did not submit a petition to be a candidate for Sixth District Knox Co. Commission. However, until he files a campaign finance disclosure closing out his account, it is my understanding of the law that he and his Treasurer are required to continue filing timely disclosures. 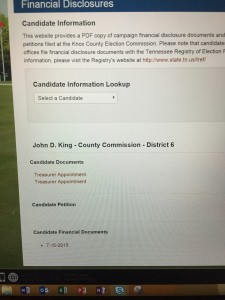