Is Mannis a Republican?

A reader sent this to me recently. I was told it was posted on 9/30/2018. Knoxville Mayoral candidate Eddie Mannis says he is a Republican.

Gov. Bill Lee is a businessman, he ran a successful HVAC company in Middle TN which still operates but not at Lee’s direction as he is Governor. 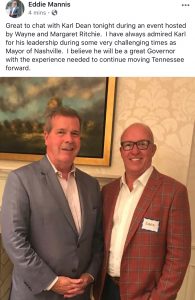