When THEY Literally CUT the Baby in Half

Last night, Knox County Mayor Glenn Jacobs called the Knox County Commission together for a Special Called Meeting to discuss the 20 plus contracts to lease the TVA East Tower. The County only wants half and will then “negotiate” leasing the other half to University of Tennessee system. That ain’t the half, I am referring too.

In an earlier part of my life, I was elected and served the Southwestern part of Knox County on the School Board. Bluegrass, Concord and Cedar Bluff. During that four year term, I even served as Vice Chairman. I have seen the School District like only few have seen it, inside and outside, upside and downside. When I blog that Knox County, Knox County Commission treat the Schools like an abusive spouse. It is not to shock you, it’s not from my blogger procoatuer ways. It’s my true feeling.

Years ago, Knox County sought to sell the Andrew Johnson Building and relocate the Schools Central Office. Now, they want to lease TVA and sell the AJ Building, moving Schools to the TVA East Tower. Last night, Matt Myers the Knox County Purchasing Director told County Commission, you are voting in January on the TVA East Tower and in February will vote on the AJ Building. because we don’t want to confuse the two. So the abusive parent is cutting the child in two to get a favorable vote.

In March, Knox County could end up with TVA East Tower and the AJ Building for county office space.

More post to come on this one. I told Mayor Glenn Jacobs privately on October 3, 2019 at the ribbon cutting for the Greenway Drive Knox Rail Salvage, what I needed to see in order to support the TVA East Tower lease, that has not happened yet. So, I still don’t like my county Government leasing from the Federal Government to lease back to the State. 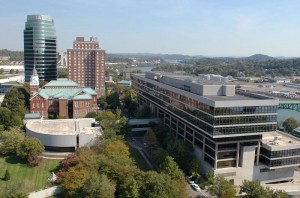