A Few Years Back

A friend of mine ran across a photograph they had taken several years ago and they recently sent it to me. I remember this. When I was elected in 2000, West valley Middle School had opened in 1999 and the school district had cut all signs from the project, as part of value engineering.
I asked nicely for several months and finally had to raise immortal which included involving a local television station. West Valley then received letters for the building and two entrance signs which included one of them having a marquee message board and this was the first message, for which I was appreciative. However, I was just doing my job, for the taxpayers. 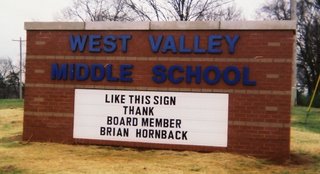